The Coupe de France match between Lyon and Paris FC was abandoned on Friday due to crowd violence, stadium authorities announced at the start of the second half. The score at the time was 1-1.

Fans were seen throwing flares, the pitch was overrun and fights broke out in the stands. A firework exploded just before the second half.

The incident marked the second time a game involving Lyon has been abandoned this season.

The president of Paris FC accuses the ultras of Lyon

“Obviously there are shared responsibilities,” Aulas told a news conference. “I don’t think we are responsible for the incidents.”

A spectator described the incident to sports station RMC, saying that “at half-time there were guys behind who climbed the fence and started fighting”.

A spectator said the supporters climbed the fence and started fighting

“There were a lot of people wearing balaclavas, they had belts on, they wanted to smash as many faces as possible,” he added.

“I don’t know if you can call them supporters, but it was a big part of the Lyon section that caused a huge crowd rush.”

Lyon supporters are under scrutiny after a French league home game was abandoned in November because Marseille player Dimitri Payet was hit in the head by a water bottle thrown from the stands. 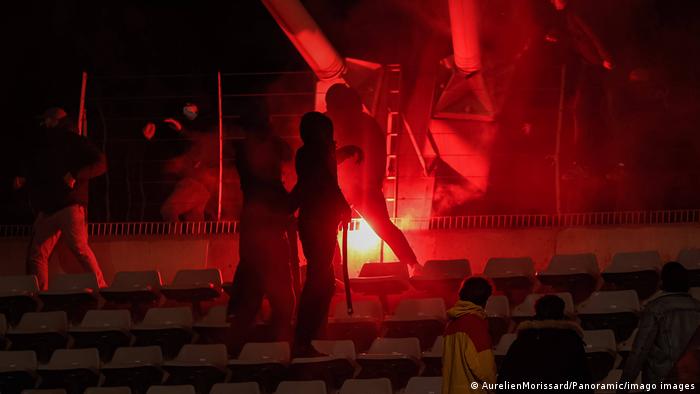 Lyon lost a point and Aulas was handed a 10-game ban for intimidating comments he made to the referee.

This season has seen a number of incidents involving fans since August, including a Nice-Marseille game which was abandoned, and another game where Montpellier fans threw projectiles at Marseille players.

In September, supporters ran on the lawn during an Angers-Marseille match, as well as during a Lens-Lille match.

San Diego Loyal goaltender Jon Kempin jumps to block a ball during the first half of the Loyal-Las Vegas Lights game. Photo by Chris Stone Irvin Parra scored the deciding goal in the 65th minute as San Diego Loyal rebounded from the first loss in their brief history with a 2-1 victory over the Las […]