Families gather in Mayfield to clean up the football field, providing children with a place to play 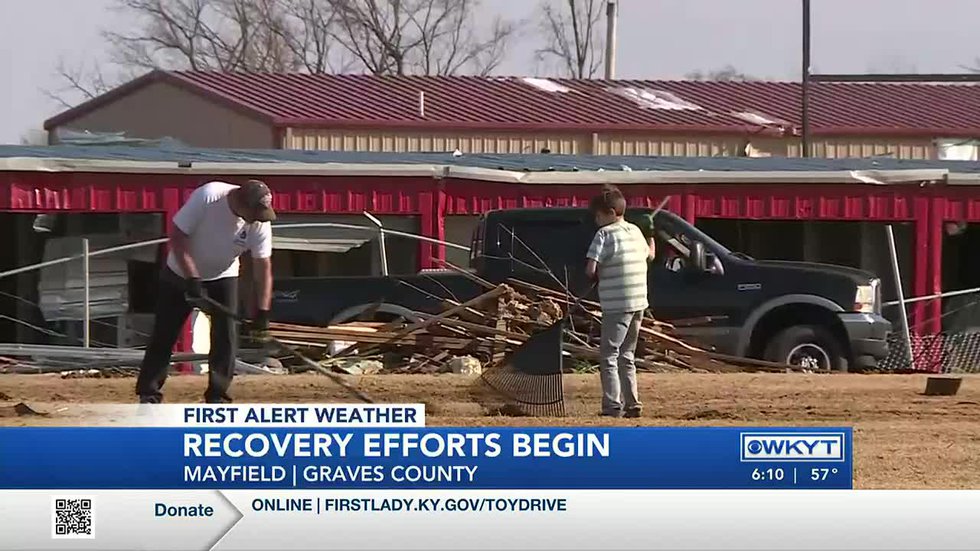 MAYFIELD, Ky. (WKYT) – It looks like a war zone in the town of Mayfield. Very little is standing, and what remains is destroyed.

In the midst of all the chaos, there were kids playing on Tuesday afternoon while adults helping clean up. And for some who don’t even live there, they said cleaning up the areas where the kids played was something they can do for the younger storm victims.

It’s a scene that’s almost unbelievable to the eye as you walk up the hill to Mayfield, a town torn to shreds by a massive tornado, nothing in its path has been spared.

“I took pictures and videos and when I try to show people it doesn’t even do the utter devastation justice at all, it’s just gone,” said Brian Flowers.

Flowers grew up in Mayfield and her son once played on a now littered soccer field. They came to try to give back to a community that has given them so much.

“Show her a little work ethic and how to think about others and not yourself and do whatever we can to help,” said Flowers.

In the midst of all this destruction, that’s what so many people are trying to do: find a way to help pick up the pieces. For a grandfather, with a grandson who enjoys playing football on this pitch, which is why he was called to Mayfield.

He said all around him the scene is like a war zone. Something he saw once in Joplin, Missouri.

“I was there right after they had their tornado over there. All the trees stripped of all the branches, it’s just very sad, a lot of dead here today or this week, ”said one man cleaning up.

This is only one area, but many people are hoping that one day will be filled with playing children, not storm debris.